RegretLocker is a new ransomware that has been found in the wild in the last month that does not only encrypt normal files on disk like other ransomwares. When running, it will particularly search for VHD files, mount them using Windows Virtual Storage API, and then encrypt all the files it finds inside of those VHD files.

Typically, VHD files are huge in size with a max size of nearly 2TB because it’s mainly ussed to store the contents of a hard disk of a VM which includes disk particitions and file systems. This makes it unrealistic for ransomware to waste time encrypting simply because it’s too big.

However, through mounting these virtual disks as physical disks, RegretLocker can go through and encrypt the individual files inside, which significantly increases encryption speed overall.

For encryption, RegretLocker reaches out to the C&C server for a RSA key in order to encrypt and produce a unique AES key. This AES key will be used to encrypt all of the files on the disks. However, if the machine is offline or it can’t reach C&C, it will just uses the hard-coded RSA key in memory, which makes it simple to write a decryption tool for!

All of the encrypted files have the extension .mouse.

Huge shout-outs to Vitali Kremez and MalwareHunterTeam for bringing this ransomware to my attention! 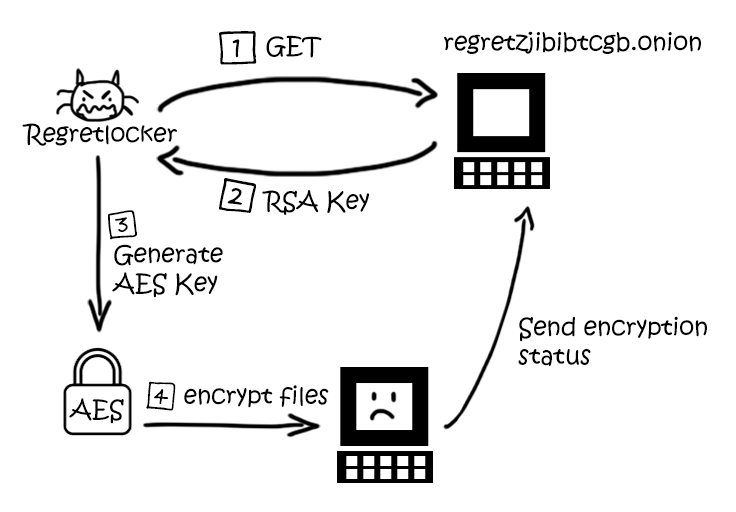 RegretLocker comes in the form of a 32-bit PE file.

Advapi32.dll and Crypt32.dll: Main crypto functionalities such as RSA and AES encryption

tor-lib.dll: DLL dropped by RegretLocker that is used to contact C&C through Tor

RegretLocker contacts the C&C server at http://regretzjibibtcgb.onion/input through Tor 3 times:

Before contacting C&C, it sends a GET request to http://api.ipify.org/ to retrieve the PC’s public IP address. If this fails, the malware can assume that it’s running offline and will use the hard-coded RSA key.

RegretLocker drops a ransom note in every folder that it encrypts. This is the content if you run the malware with Internet connection. The hash is used to identify which RSA key is used to generate the AES key on your machine. 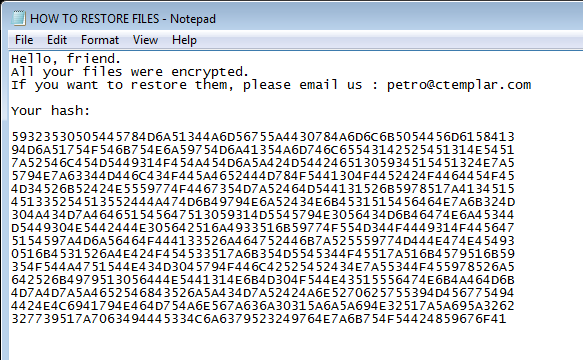 You can find malware log here on my Github

Only One Process Running

RegretLocker first check if there is only one version of itself running by looping through all of the running processes using CreateToolhelp32Snapshot, Process32First, and Process32Next.

For each of the running processes, it compares the name against its own name to make sure that there is no process with the same name.

If there is one with the same name, the ransomware exits immediately. 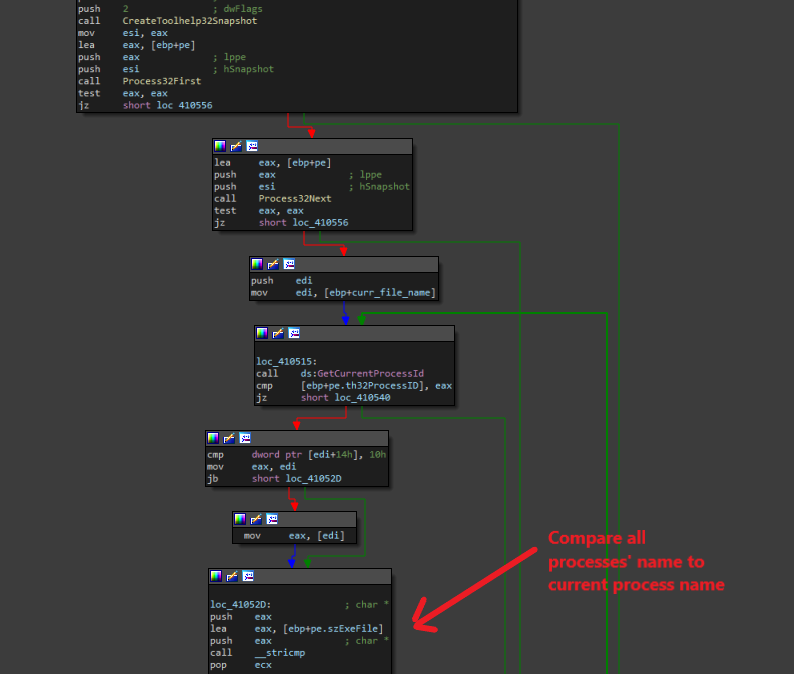 The malware extracts the path to the current directory it is located in through GetModuleFileNameA and concats ”\tor-lib.dll” to it, which means that it drops this dll in the same directory of the malware.

It then calls a function to extract the dll from its resource section through FindResourceA, LoadResource, and LockResource. As we can see in Resource Hacker, the dll is stored unencrypted in the resource section. After extracting the dll, it calls LoadLibrary to get a handle to the dll. This handle will be used for the malware to contact C&C.

The malware writter has 2 weird checks to check for a particular user name and PC name(WIN-295748OMAKG). If the user name or the PC name matches, the malware will exit immediately.

This is potentially just a check against the development PC to make sure that the ransomware does not try to encrypt the machine during development.

As a developer myself, I’m disappointed by this unprofessionalism

. Clean up your damn code please! 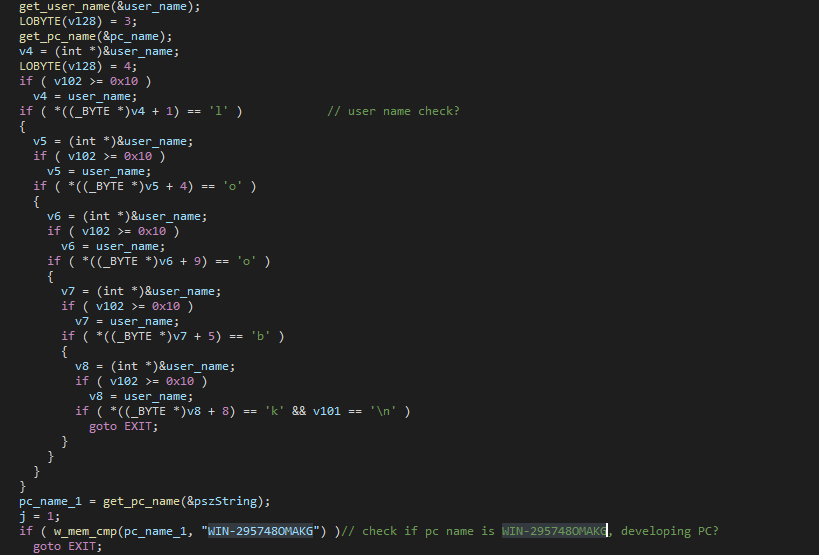 For persistence, the malware set the registry SOFTWARE\Microsoft\Windows\CurrentVersion\Run to the path of the malware. This ensures that the malware is automatically run every time the user logs into the machine.

Next, it also schedules the malware as a task every minite using this Schtasks.exe command, which is run from cmd.exe using ShellExecuteA.

The malware builds and executes this command from cmd.exe.

Next, it loops through all the drives and add the name of those with the drive type DRIVE_FIXED, DRIVE_REMOVABLE, or DRIVE_REMOTE. 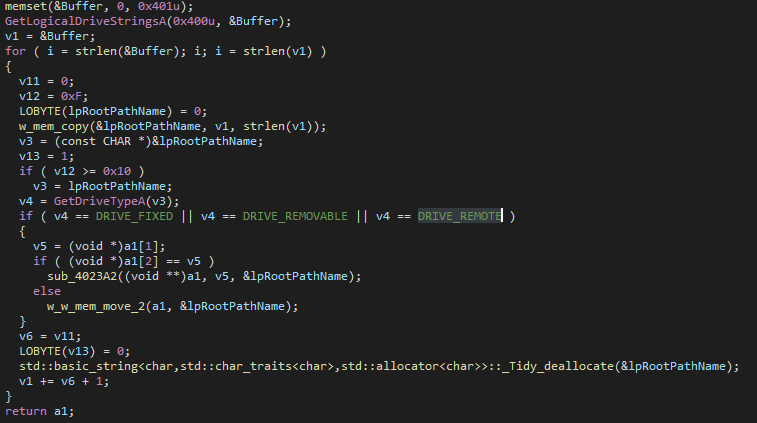 These names are mounted to the C drive using GetVolumePathNamesForVolumeNameA, SetVolumeMountPointA, FindFirstVolumeA, and FindNextVolumeA. Since this function name is labeled as show_hided_drives(), this function just probably mounts all the valid drives so it won’t miss any hidden drive. 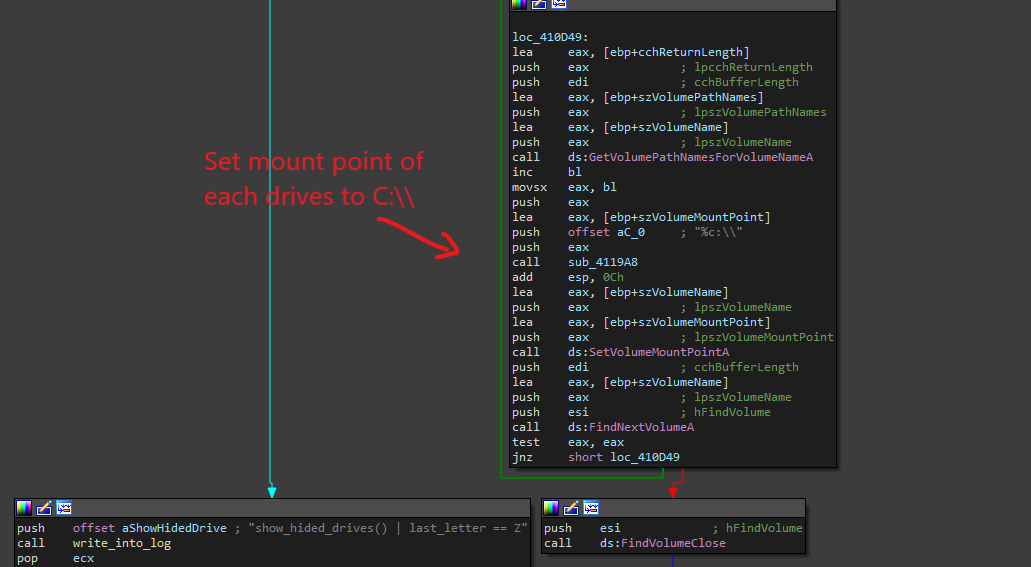 As discussed above, the malware will first reach out to C&C at http://regretzjibibtcgb.onion/input with get_key in the query to request the RSA key.

The global variable RSA_KEY will be written accordingly with the RSA key depending on if it can reach the C&C or not. If it can’t, it will use this hard-coded RSA key.

Using the RSA key, it will call CryptAcquireContextA, CryptDecodeObjectEx, CryptImportPublicKeyInfo, and CryptEncrypt to encrypt the “AES” buffer in memory, generating a new AES key 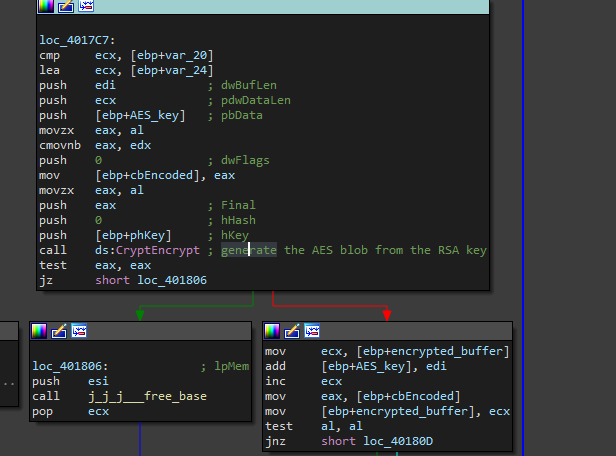 With this method, the malware can generate a different AES key as long as it’s receiving a different RSA key from C&C. However, this AES key is constant after this encryption if the malware is run offline, so it should be straightforward to produce a decrypting tool if either C&C is down or the PC is not connected to the Internet.

The first encryption happens to USB drives, if there are any. This function is called to retrieve the name of all the USB drives by checking for any drive with DRIVE_REMOVABLE type. This function was pretty similar of the one previously used in show_hided_drives(). 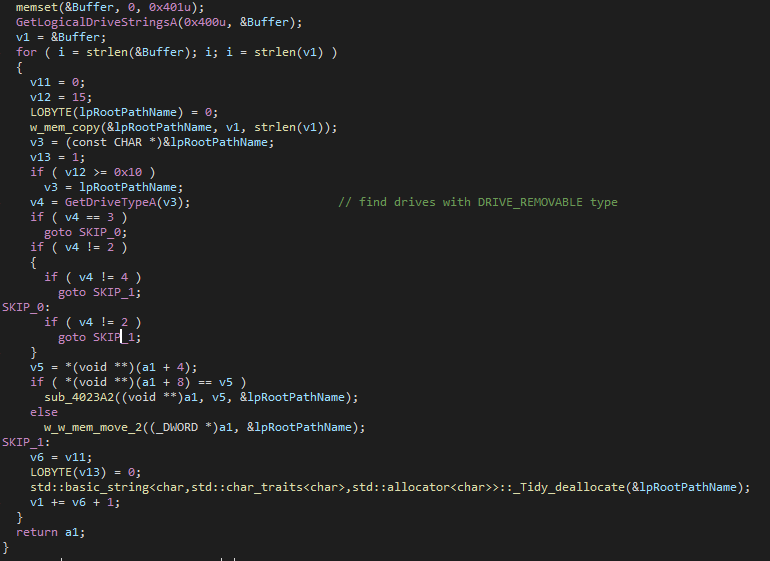 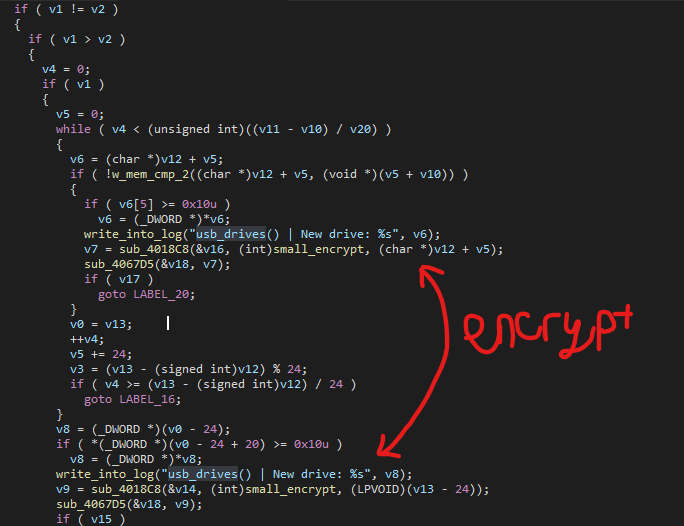 I will dive into these encryption functions later because there are a few different version to cover.

The malware is written in C++, and there is a class called smb_scanner. The SMB function tries SMB scanning to find 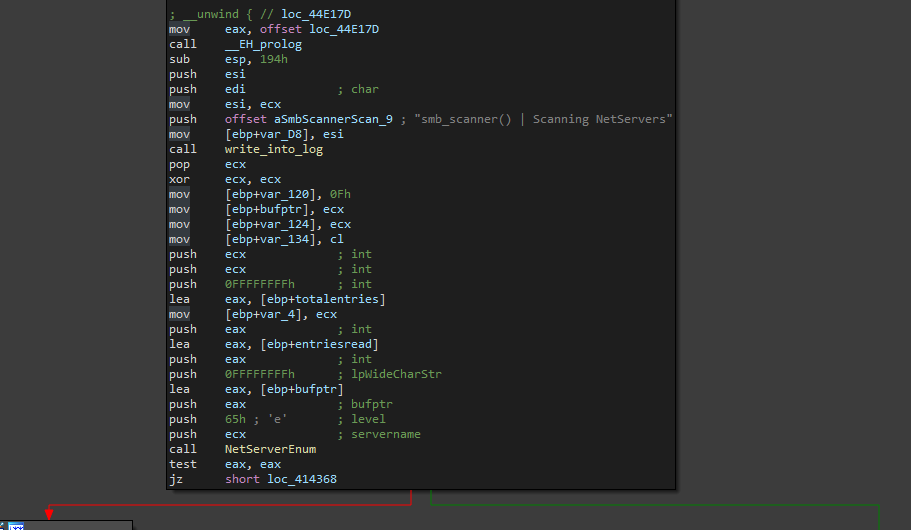 The result value is a buffer of all the SMB folders in string form.

Then, it goes through a while loop calling a function to encrypt these SMB folders, so I label this encryption function as smb_encrypt(). I actually have not set up SMB on my virtual machine, so when I ran this, I did not know if it could actually encrypt SMB folders or not… 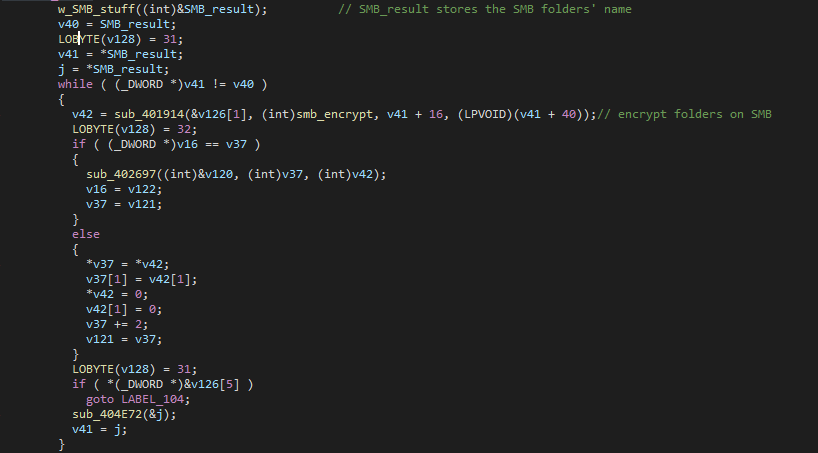 The malware has a specific method of looking for large files and then begins to encrypt them right after the SMB encryption. 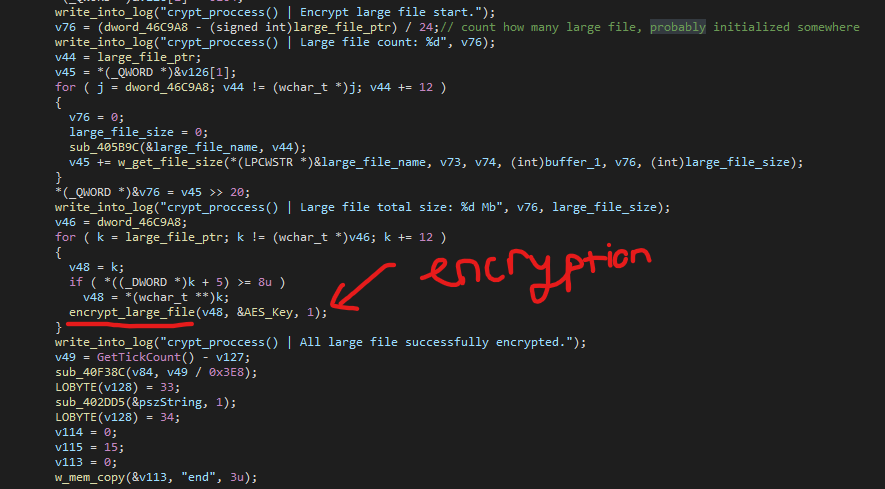 The malware author called this encryting function encrypt_large_file(), so I just went along with it. Seems like it’s the same as most of the other encrypting functions except that it has extra stuff to account for the file size. The core of this function still boils down to an AES encryption.

After the encryption, it will rename the encrypted file to the same name but with the extension .mouse and overwrite the file buffer with this newly encrypted buffer.

After the large file encryption, RegretLocker goes into a while loop to encrypt everything else with small_encrypt(). 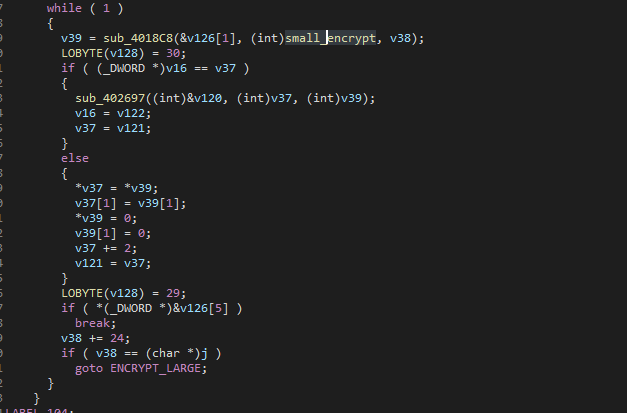 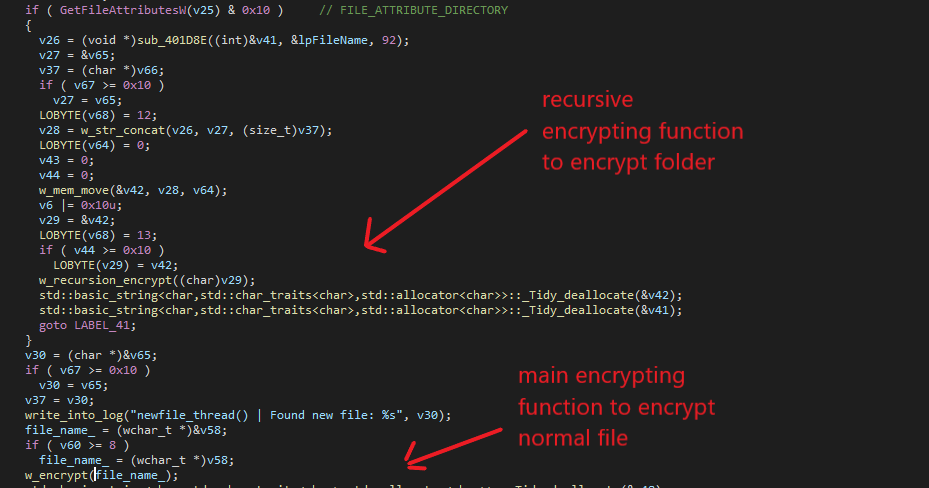 Inside of the recursive encrypting function, RegretLocker specifically looks for these file names to avoid encrypting them.

Since the drives are mounted, RegretLocker checks the file extension for “.vhd” in order to detect any virtual drive. If found, it will call a function to open the virtual drive to start encrypting everything inside by recursively calling back to the recursive function. The ransomware uses a series of calls to OpenVirtualDisk, AttachVirtualDisk, GetVirtualDiskPhysicalPath, FindFirstVolumeW, CreateFileW, DeviceIoControl, GetVolumePathNamesForVolumeNameW, and FindNextVolumeW to retrieve a list of file and folder names inside. 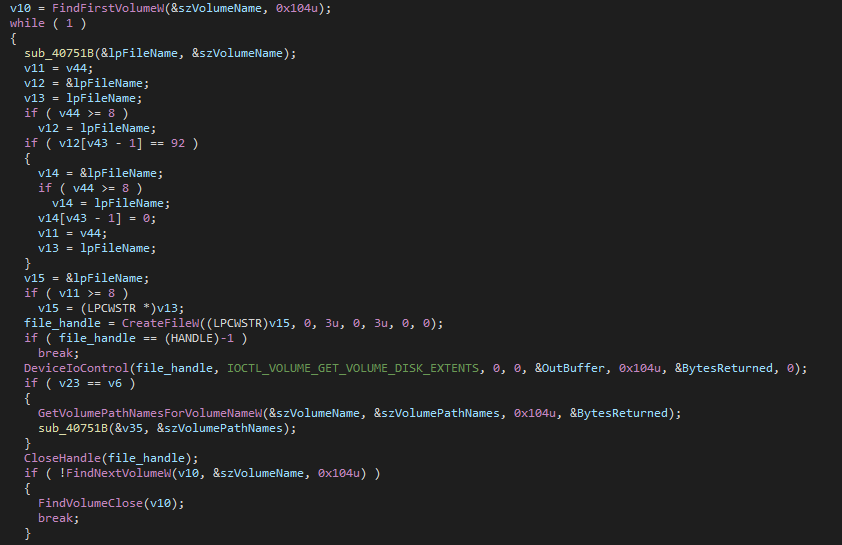 If the file is not a folder, it will just call the main encrypting function to encrypt it.

This function is divided into 2 condition blocks. If the file size is greater than 104857600 bytes or around 105MB, the file is counted as a large file and will be encrypted with the encrypt_large_file() function. If it’s not, then RegretLocker proceeds to encrypt it using AES.

There is a catch here. If the encryption fails, it means the file is running or used by some process. For that case, RegretLocker will find the process that is currently using this file and attempt to terminate it. It’s accomplishing this through the use of Restart Manager with these API calls.

After getting the processes that are using the file, it checks for the name. If they match any of these, they will not be added to the list and closed later. 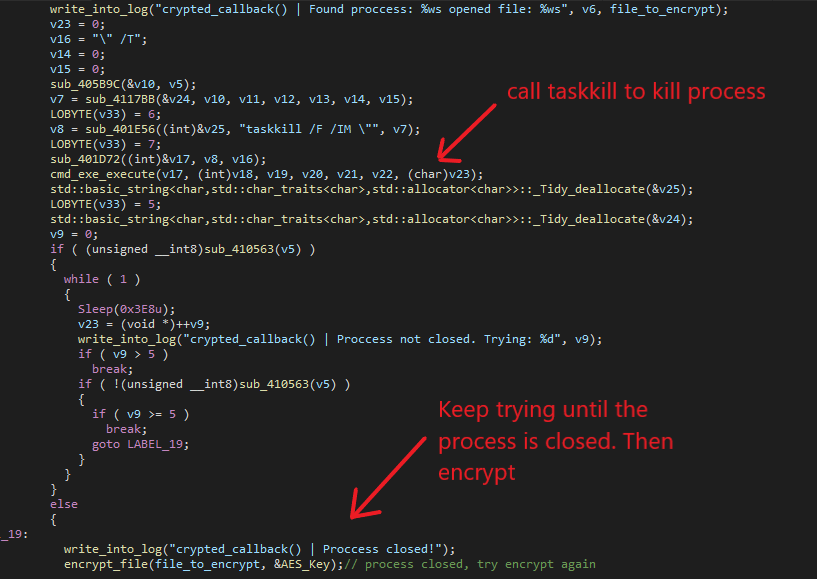 RegretLocker then builds the command string taskkill /F /IM \process_name and runs it with cmd.exe. This command basically just filters out the process with the given process name and terminates it.

The ransomware will continuously loop until it successfully closes the process. Then it will attempt the encryption again.

The core of the encrypting functions above are this one AES encrypting function. It basically just uses the generated AES key to encrypt the file with a series of calls to CryptAcquireContextA, CryptImportKey, CryptSetKeyParam, and CryptEncrypt, which is fairly standard.

After the encryption, it will write this encrypted buffer back into the file with the new file extension .mouse. It will also check the folder path to see if it has created the file HOW TO RESTORE FILES.TXT already and created one if it has not.