This is the fourth post of my reversing series following the previous posts about Reversing.kr.

This time, the challenge is Ransomware. From this name, I guess we will be dealing with encrypted files!

First, when we unzip the zip file, we get 2 files, file and ransomware.exe.

Since there is no file extension on file, I suspect it being in binary form and encrypted. Let’s open it in HxD to check it. 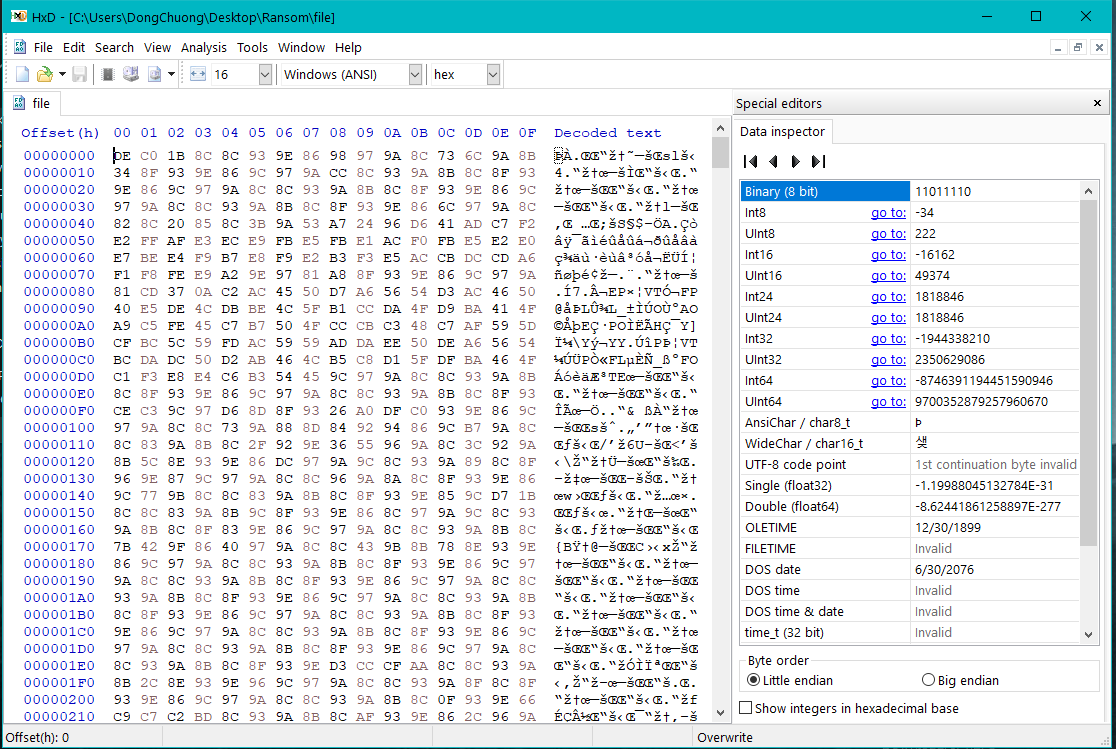 This file just contains random-looking bytes. I don’t recognize any of the normal file type here, so we must try to unencrypt it.

Let’s run the executable to see what its functionality is.

The executable just prompt us for a key, and then it writes stuff into file accordingly. If we view file content again, this will look oddly similar to an encrypted Windows PE file. 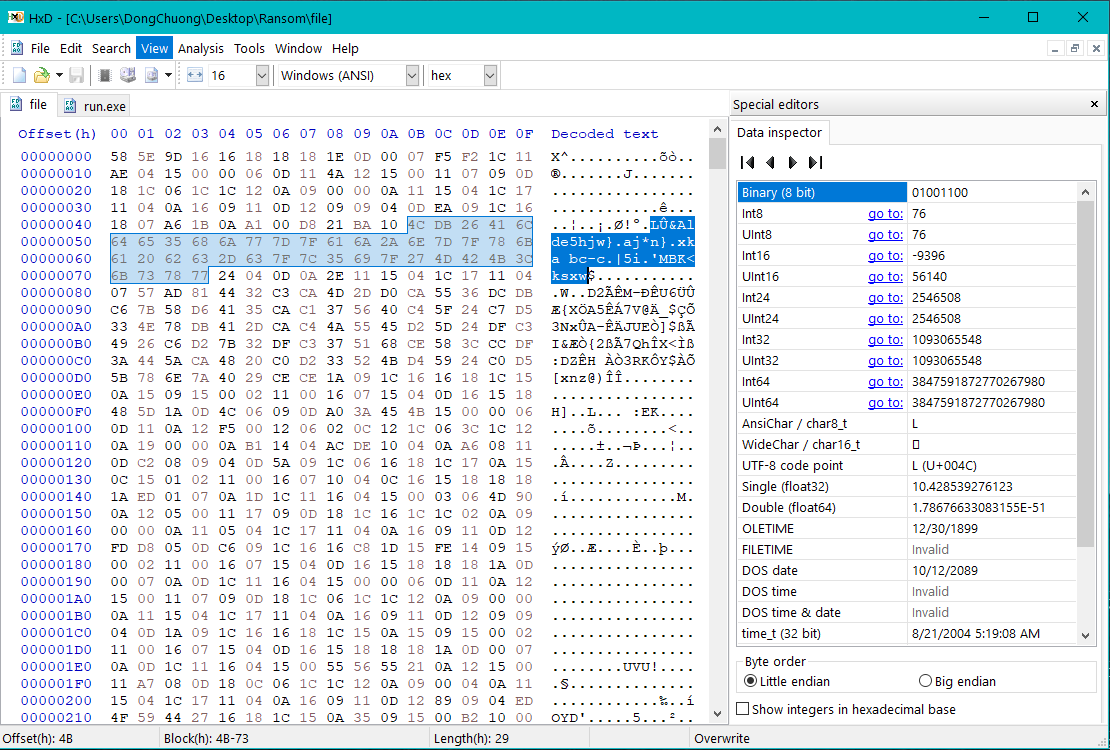 Let’s compare that with a valid Windows PE file. 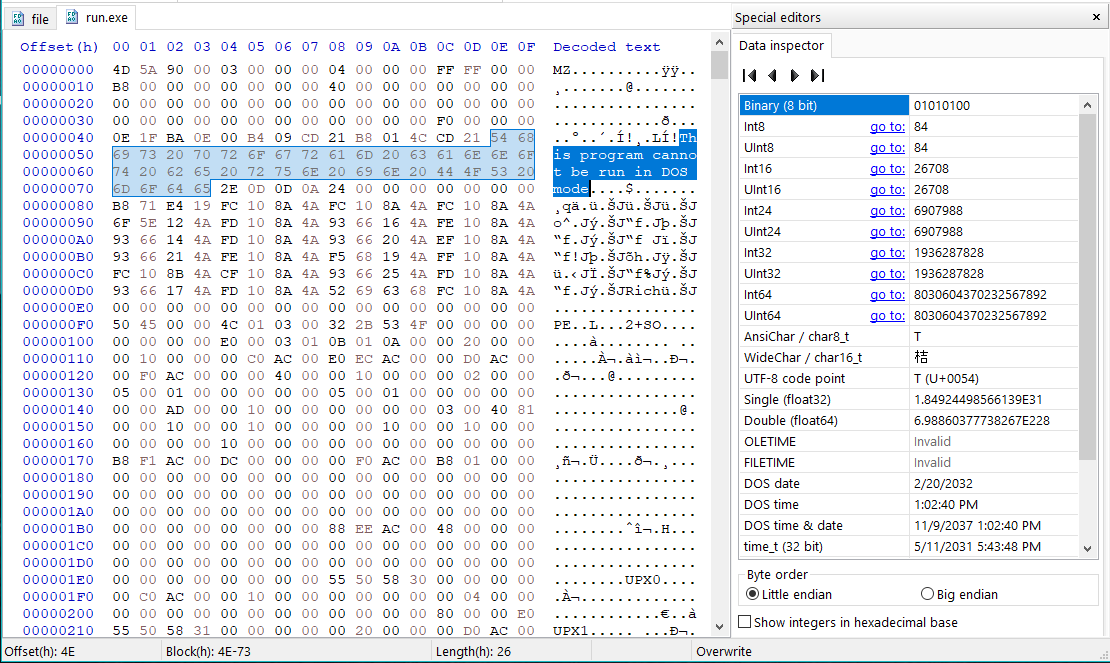 It seems like they are using a XOR encryption to encrypt every byte except byte \x00. Interesting! Let’s throw it into IDA! 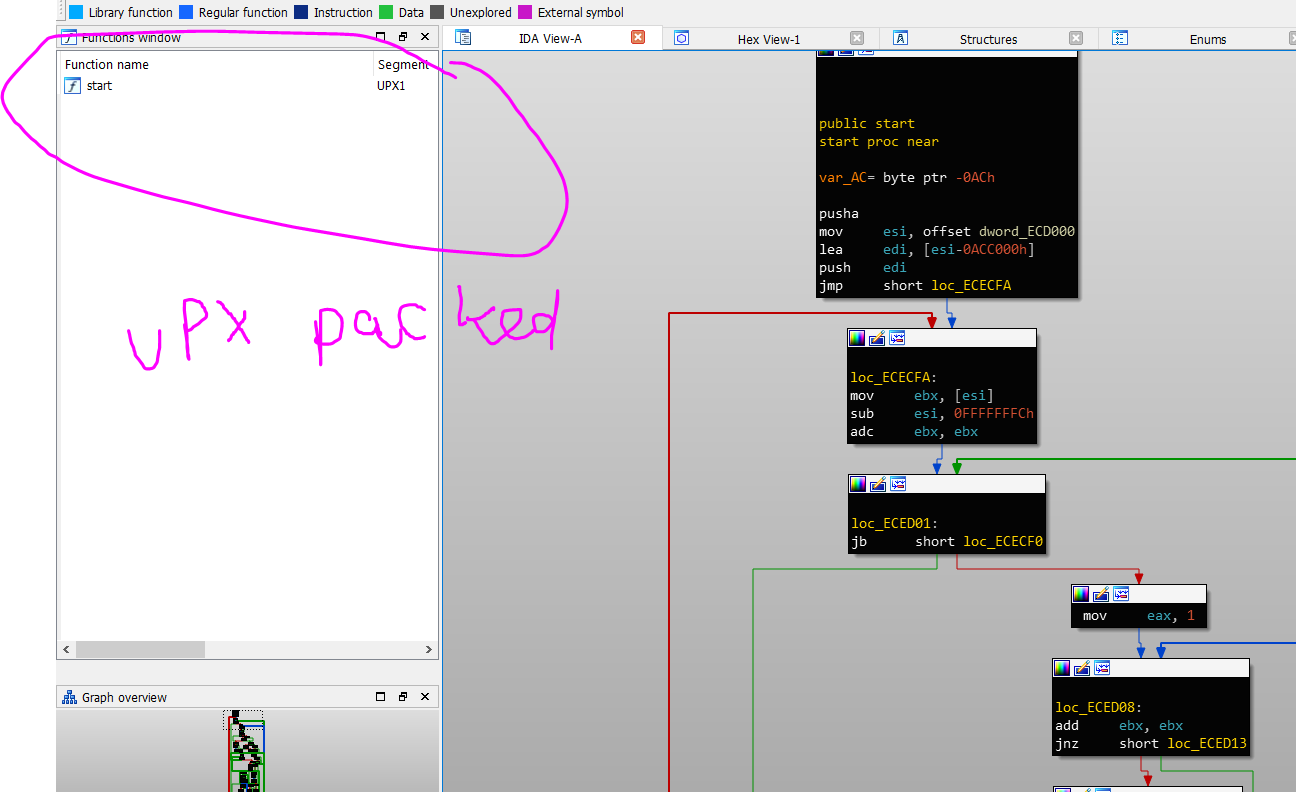 So this executable is encrypted with UPX. Let’s just quickly unpack it using UPX.

Now that we have unpacked it, let’s view it in IDA and see what we get. 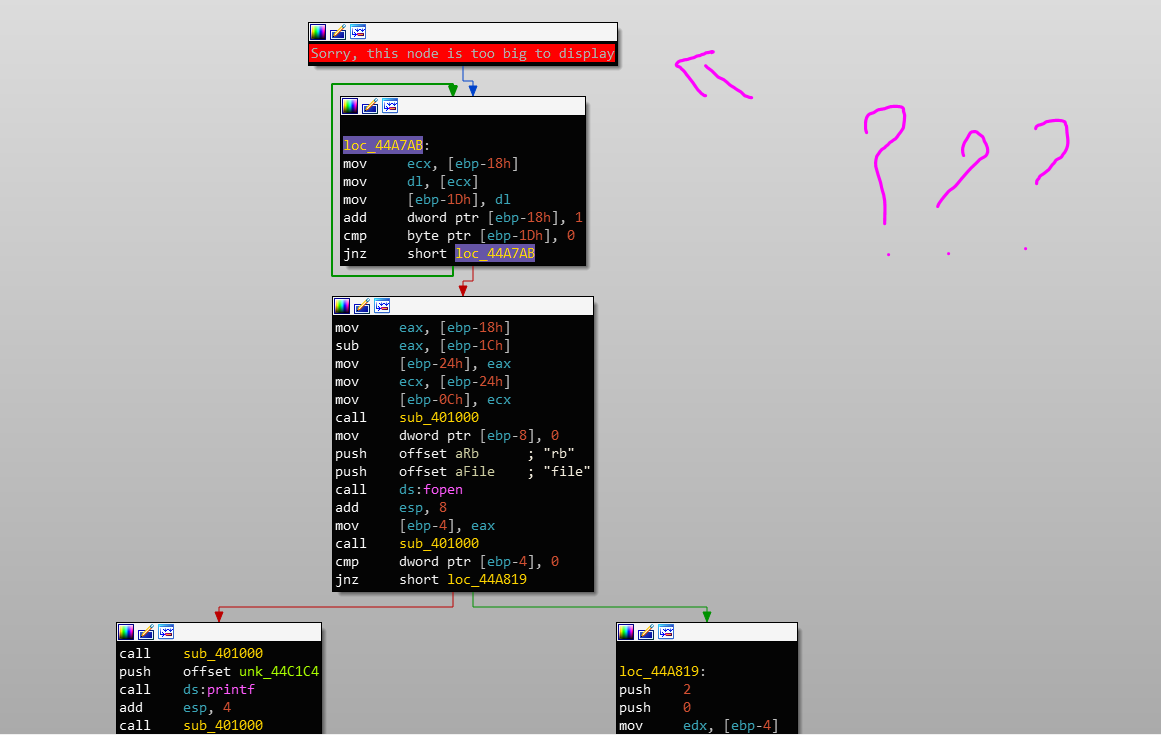 Yikes, I have never seen this from IDA. This function is too large that IDA graph view can’t even display it. Also, since it is too big, IDA becomes really laggy and I can not get anything done with it.

Let’s try using x64dbg to debug it and see why it’s so long.

At 0x44A775, we can see the normal executing code containing printf and scanf and all that, but what is all that crap above it? It seems like just a bunch of useless instruction that cancels each other out(push, pop, pushad, popad, and nop).

No wonder why our code is so long. The author of this challenge just pad the executable code with this so we can’t view it in IDA. It doesn’t matter tho because we can just patch and skip out on all of it. If we scroll up a bit, we’ll see some valid code again at 0x43819F.

This is super far away from 0x44A775 with a bunch of useless instruction between. Let’s just try and have a jmp instruction at the end to jump directly to 0x44A775. We can patch it using OllyDbg cause it’s easier compared to x64dbg!

After doing this a few time, we can eliminate all the useless code, dump it out through OllyDbg, and start disassemble it in IDA! 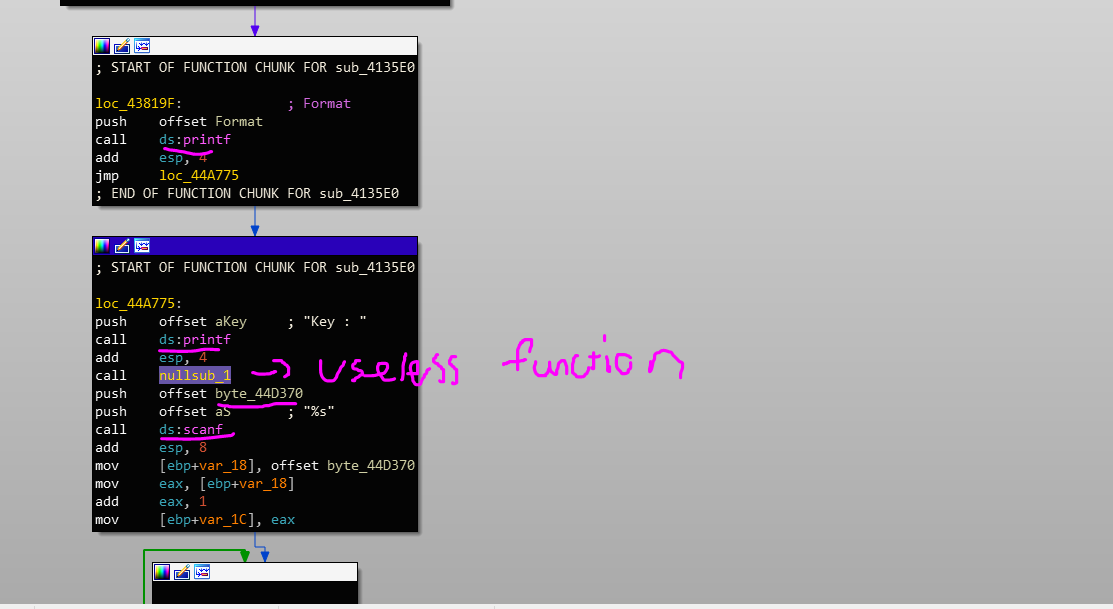 Here, we can see the two printf call, following by a scanf call just like when we observe the executable’s functionality. Notice how offset byte_44D370 was pushed on the stack as the parameter for scanf, we know the pointer to our key will be there after the call. Then, the pointer is written into var_18, so let’s rename var_18 to input_key_pointer and move on.

Here, we see input_key_pointer + 1 is stored into var_1C, so var_1C is a pointer pointing to the character at index 1 of the key.

After that, we subtract the difference between the current input_key_pointer with var_1C to get the length of the input key! This length is stored in var_24, so let’s rename it and move on.

Next, we see a call to fopen, and the file stream returned is stored in the variable File. Then, this variable is check to be null or not. If it is, we exit promptly. If it is not, it means we can open the file file and we will branch to the right! 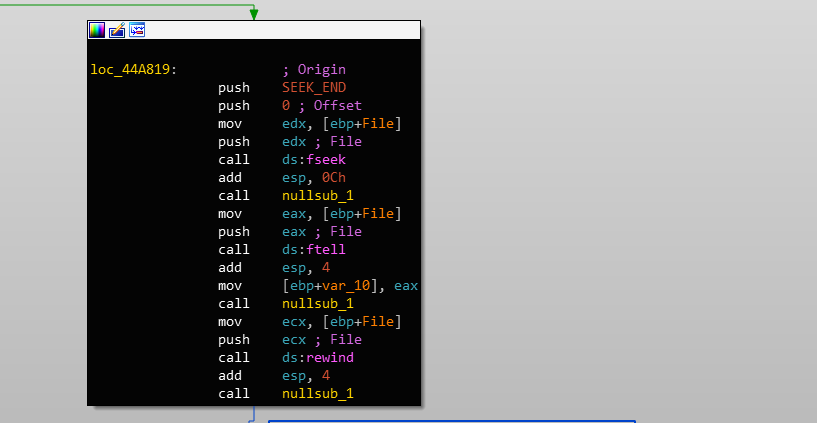 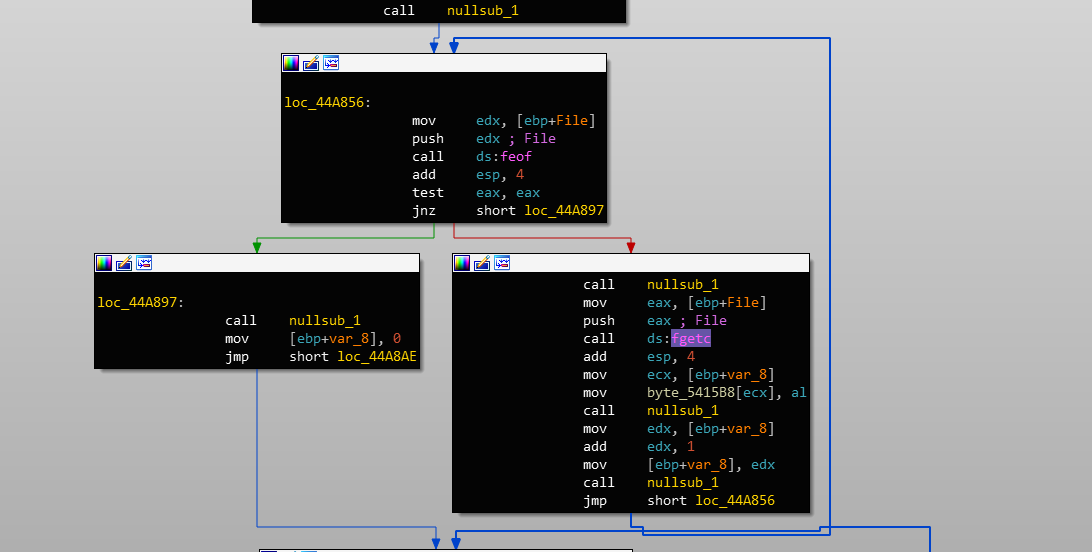 Now, we have a loop! This is just a while loop that goes until feof returns a non-zero value (the end of the file is reach). In the body of this loop, var_8 is basically a pointer to a counter variable that counts up from 0. We just read a byte from the file using fgetc each time, write it into byte_5415B8, and increment the pointer. Let’s change byte_5415B8 into file_buffer because at the end of the loop, this memory buffer will contain the entire file, and the var_8 counter is reset to 0! 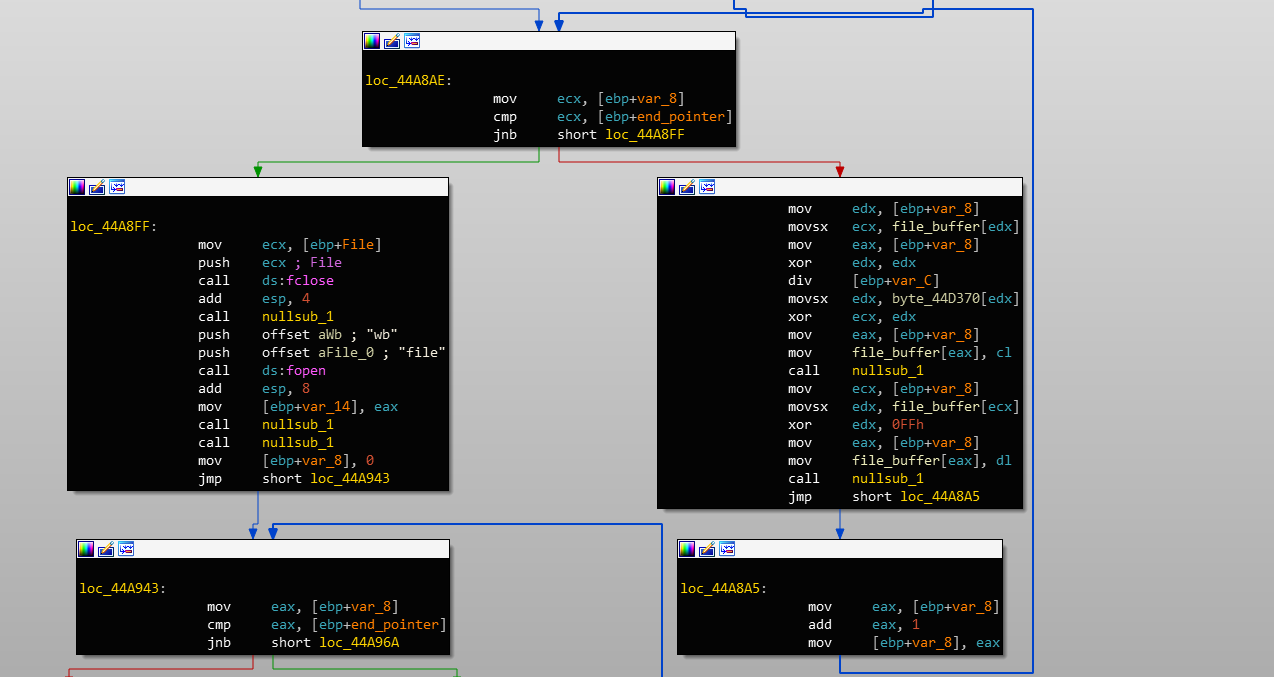 Here, we have reach the final loop of this function. This loop executes until the var_8 counter equals to the end_pointer variable. In this code block, there are two XOR calls.

After the loop exits, we will write the entire file_buffer back into file.

So there we go, we have had the algorithm to unencrypt the executable. Let’s write a python script for that. Since at position 0x4E to 0x73 in any executable file, there is the DOS stub with the string “This program cannot be run in DOS mode” there. We can reverse engineer our way back to find the correct key by XOR-ing that string with 0x99 and whatever bytes in that range in the file file.

If we run the original executable and give this key as the input, we will see file changed into an executable file! 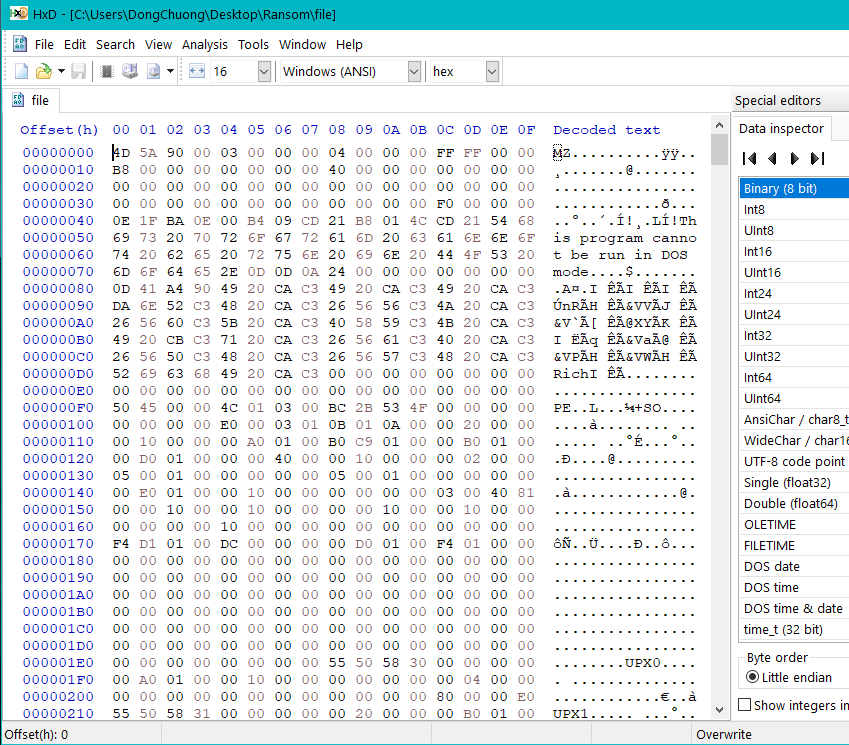 When we execute this file, we will see the flag being printed out!

Overall, this challenge took me a while to do. The useless bytes patching took most of my effort because I’m not too experienced with file patching. The rest is pretty simple with just a XOR-encryption algorithm using the input key!

Also, a huge hint to help me figure out that the final form of file is an executable was how the encrypted file looks like after my first run. It would have been much much harder if the author hides that, but oh well! It was a fun challenge overall.