This task’s prompt was about time travelling, so I first assumed that it has to deal with time manipulation inside the executable. 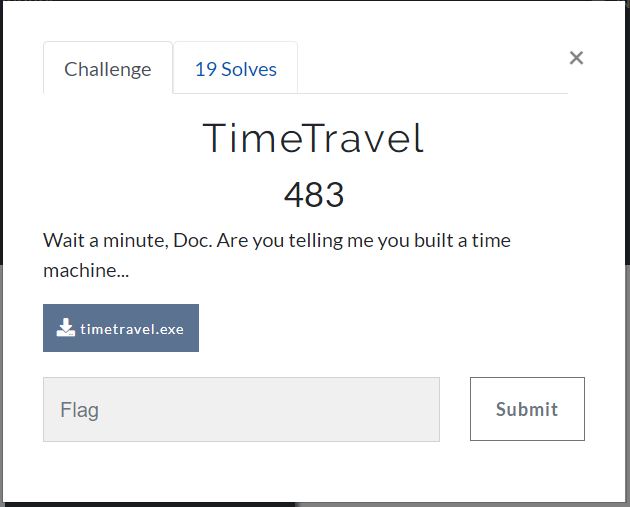 When I first ran the executable, this is what I get. Seems like we are just going through these dialogs forever, and nothing is being prompt for us to input

Let’s open it in IDA and see what we get! 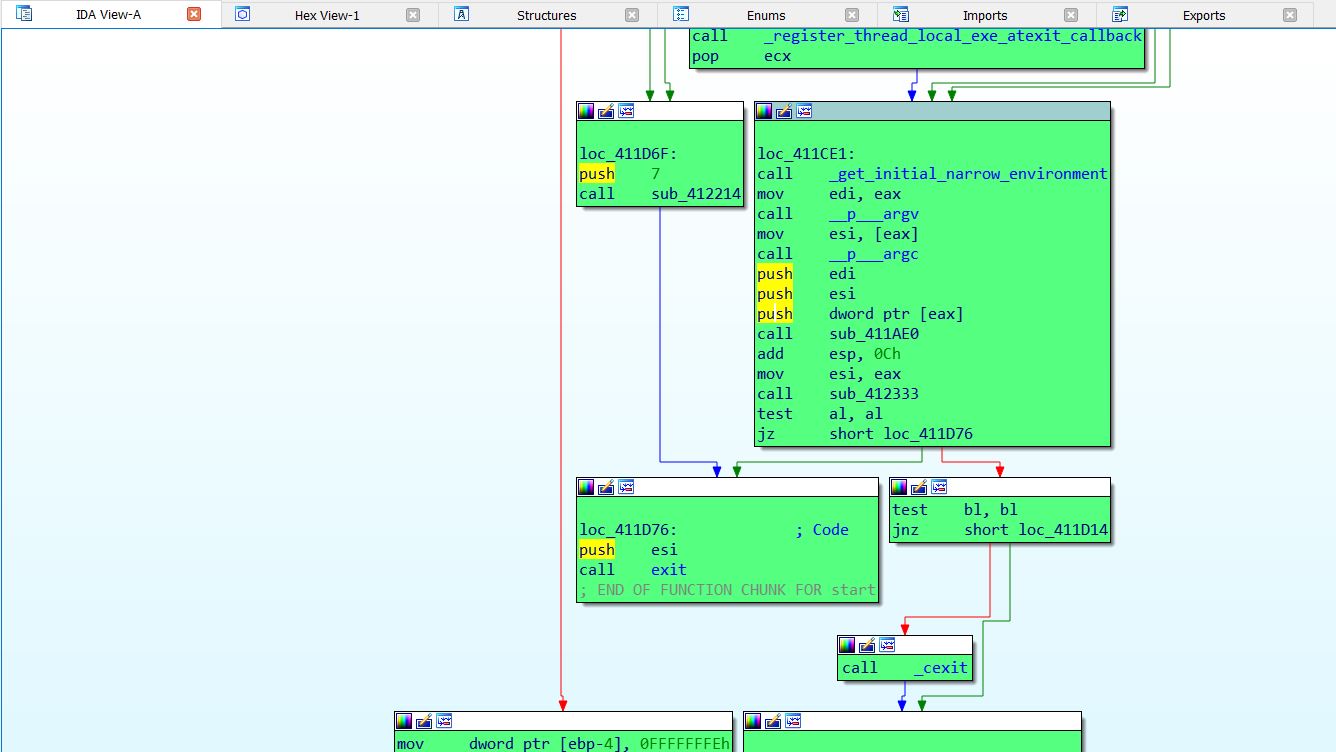 First, we need to look for the main function. This is simple because we can start at the entry point and look for 3 push calls followed by a function call. 96.69% of the time, this function is main, and in this case, it is sub_411AE0. 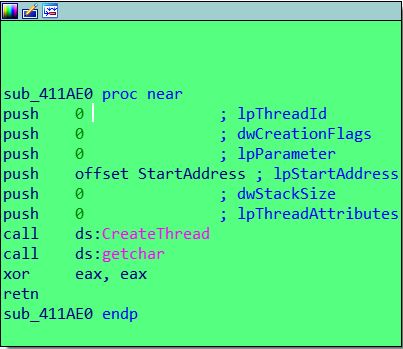 Pretty straightforward function! Main is calling CreateThread, and this thread is going to execute the code at StartAddress. 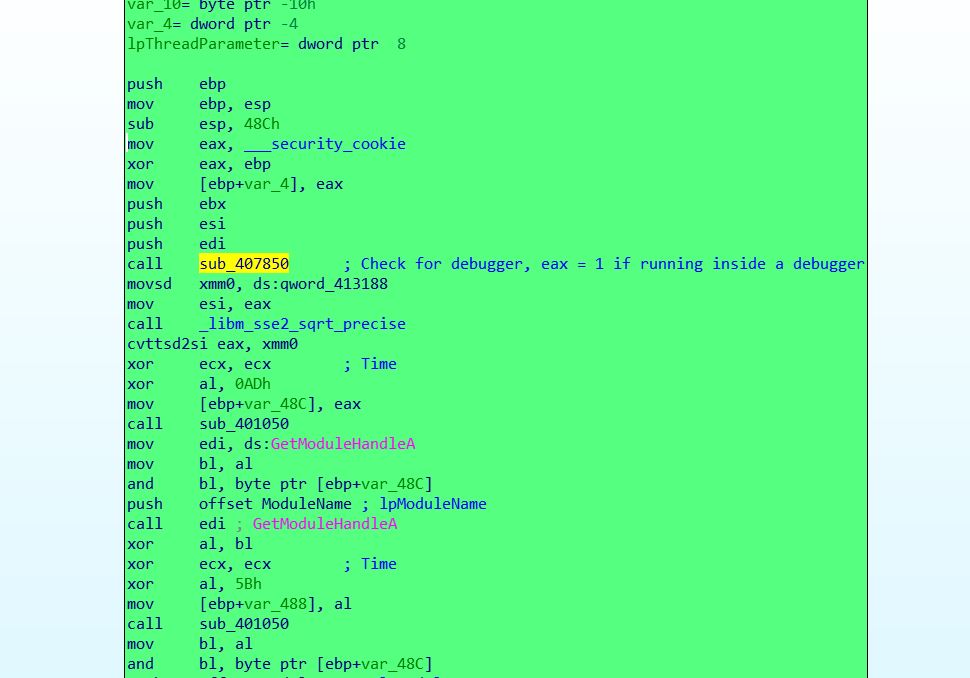 Following this, we see a bunch of GetModuleHandleA, but we don’t see any call to the modules being returned. Therefore, I just ignored it when looking at it! 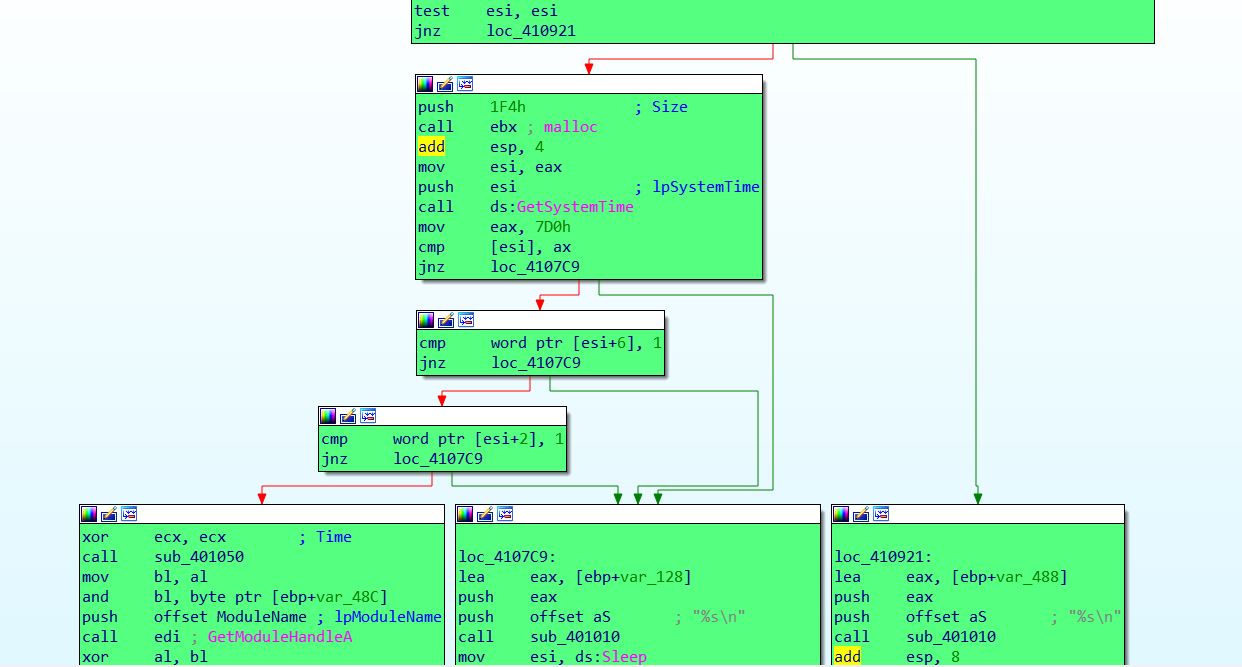 This is the interesting part of the code. Earlier, we saw that the result of sub_407850 is stored in eax as 1 if we are using a debugger, and then this value in eax is stored inside esi.

Here, we are testing if esi is 0 or not. If it is not, we branch to loc_410921. If you execute the code through IDA, you will see this. It seems like we want to avoid branching to this section.

Also, from earlier when we ran it, it seems like the code branch to loc_1207C9 to bring all of those dialogs. We might want to avoid this branch too. There are a few checks that we need to bypass.

Seems like it’s calling GetSystemTime and read the system time into the buffer stored at esi. This buffer will be a struct of SYSTEMTIME. From there, we can assume that [esi] = wYear, [esi + 2] = wMonth, and [esi + 6] = wDay. The code is checking if the year is 0x7D0 which is 2000, and month and day are 1.

We can simply use OllyDBG to patch this executable and solve it!

First, we need to change the debugger check into a bunch of 0x90 (NOPS) so we ignore this jump completely.

Second, we need to change the date to the current time on the system. Currently, it is 07/06/2020 in my machine, so let’s change the checks to that. Here is how I patch the executable. 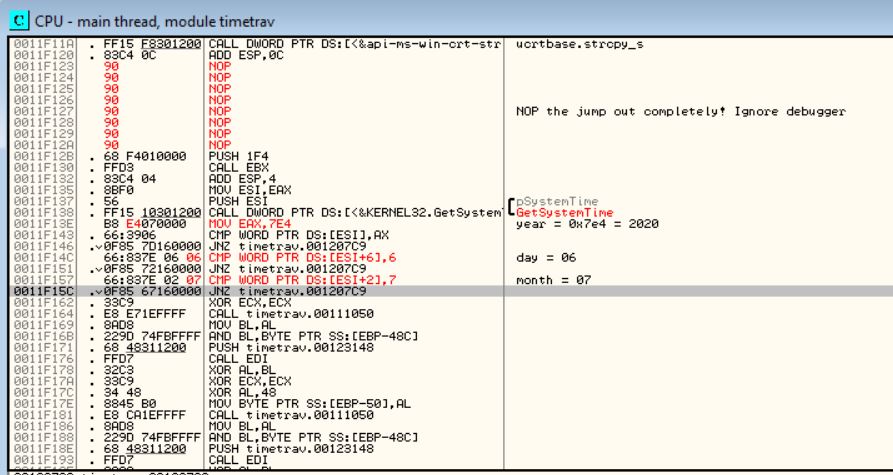 After extract the newly patched executable, we can run it and the flag is given!!

I did not solve this challenge during the time of the CTF, but I came back and worked on it!

This is the prompt. 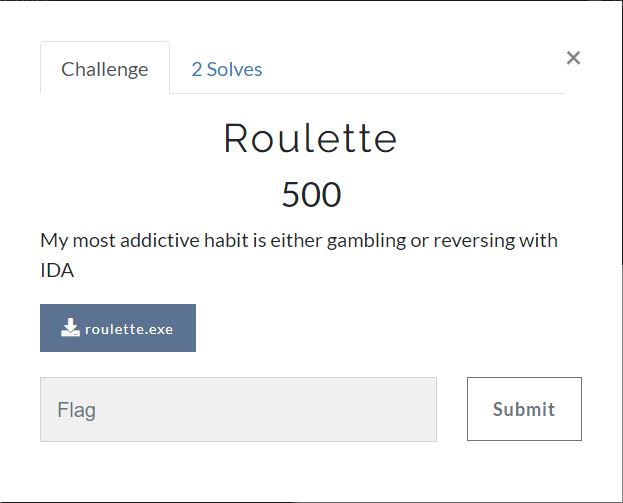 This challenge seems to have a roulette theme, but beside that, nothing much can be get from the prompt. When we run the executable, nothing shows up, which lets us know that we have to use a debugger for it. Let’s throw it into IDA! 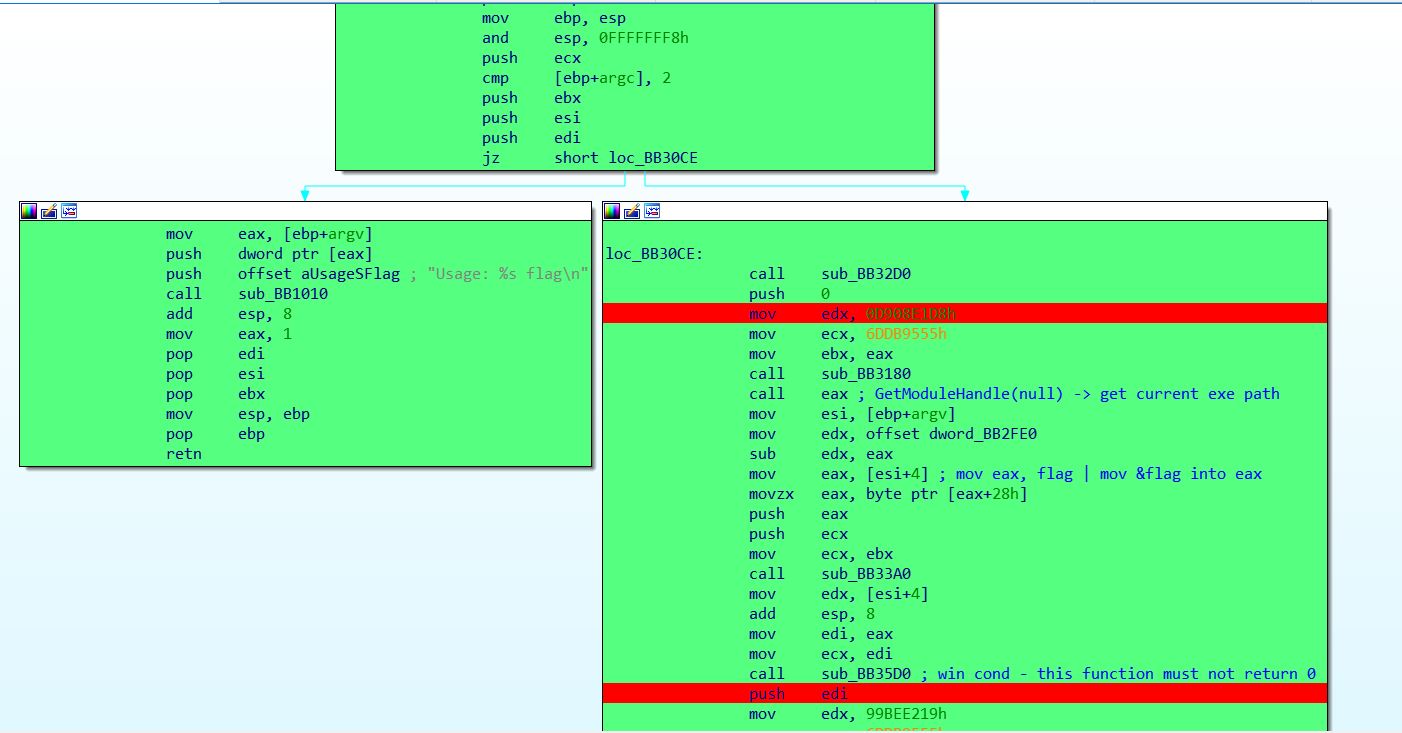 First, it seems like we checking if argc is 2 or not, which means the executable takes in a command line parameter, and according to the prompt, it’s taking in the flag.

If the flag is given, we will branch to the right. sub_BB3180 is a special fast-call function that is used to obsfucate the function calling, making static analysis harder. However, after steping through the code, I notice that this returns a function address into eax depending on the value of edx and ecx.

First, it’s calling sub_BB32D0. This function makes a series of calls using the obsfucating method above, but generally, it looks something like this. The calls are GetModuleFileNameA, GetLastError, and CreateFileA. Basically, it’s checking the executable’s existence! We don’t need to worry much about this.

Next, it’s calling GetModuleHandle with a null parameter, which will returns the handle to the current executable.

Then, it makes a call to sub_BB33A0. This function took me a while to process, and here’s the code in BinaryNinja.

Let’s break it down. First, using the file handle, it calls GetFileSize to get the size of this executable. Then, it calls GetProcessHeap and RtlAllocateHeap to allocate a buffer of the size we just got.

It will attempt to read the entire file into this heap buffer, and change the entry point of this executable in the buffer into some value. Next, it will xor the block of size 0x120 bytes with the flag[40] character. Afterward, it calls GetTempFileName and CreateFileA to create a temporary file, and calls WriteFile to write the executable inside the buffer into this temp file.

Overall, we can see what they are doing. They change the entrypoint to a block of code, encrypt the block with the 41th character of our flag. Next, we see main calls the function sub_BB35D0 to check the flag.

This function is huge, so I’m not gonna show it. Basically, it’s creating a string “./temp_file our_flag” (depending on what the name of the temporary file and our flag is), calls CreateProcess to execute this temporary file with our flag as the command line argument.

Then, it will calls WaitForSingleObjectEx to wait for this process to end and calls GetExitCodeProcess. This exit code must be 0 in order for everything to works, and this means that our temporary file must execute and exit normally.

This is a problem because the block of code at the entry point was xor-ed with our flag’s character, so it won’t be making much sense, and will not exit properly by executing invalid code. We must make the xor-ed code result valid code.

Through PEid, we can see that the entry point of this temp file is 0x2FE0, and we must make the code at this entry point work. The simplest method is to make the first byte at this point 0x55, which is push ebp. This instruction is the typical starting instruction or any function, so let’s try that.

It looks perfect like a legit function!! Let’s see what it’s executing here. First, it’s calling GetCommandLineA to retrieve the flag from the command line argument. Next, it calls the function sub_4B32D0 to do the existence checking like the parent executable. sub_4B33A0 is the same function to generate the temp file as above.

This might recursively calls for a lot of time, and we can perform our XOR calculation to change our flag the same way.

We know that the index of every file is at an index of 0x3011 - 0x2FE0 + 1 or 0x32 constant, and this should be easy. We can write a simple python script to recursively do this.

After running the python script for a while, we will see something like this! The correct flag is cscml2020{p3_i5_my_f4v0rit3_r0ul3tt3_f0rm4t}. 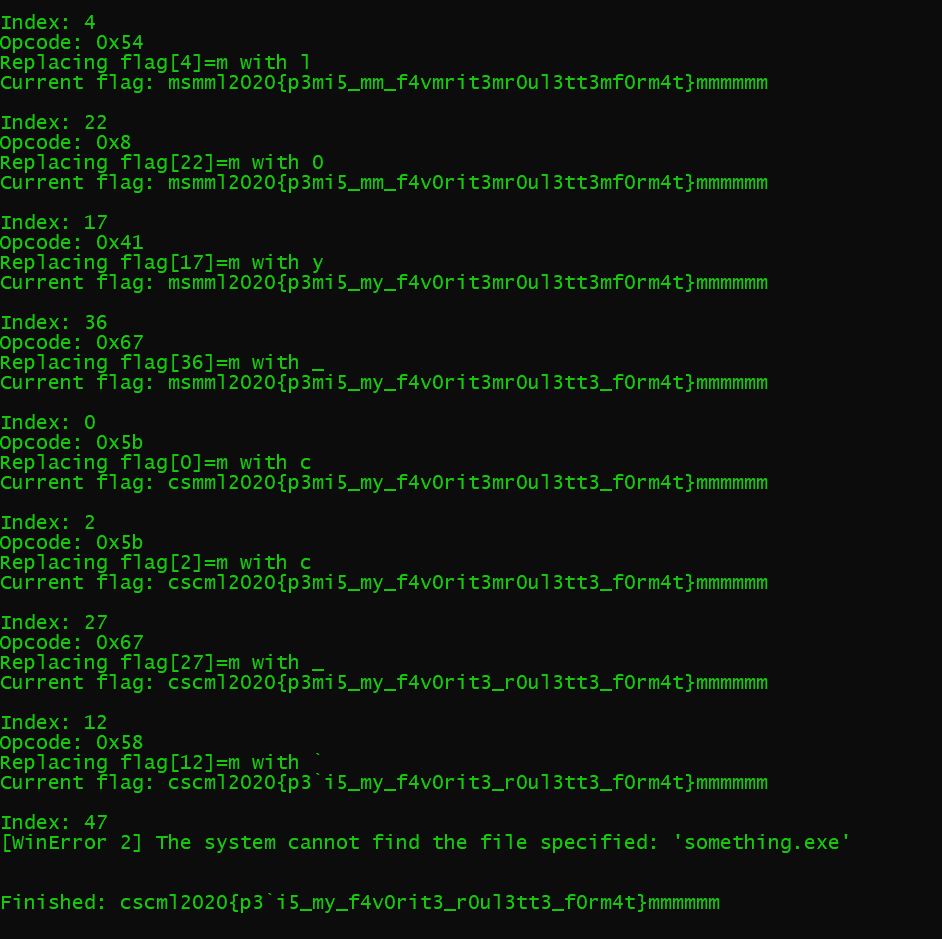 Huge shoutout to 1byte for helping me figuring out how to write the script to check the files recursively!!